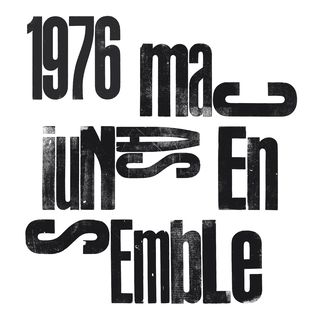 The Maciunas Ensemble was founded in 1968 by Dutch musicians and sound artists Paul Panhuysen, Remko Scha and Jan van Riet. It has existed ever since, though having gone through a number of membership changes until today. The group's intention was to realize the piece "Music for Everyman" by Fluxus initiator George Maciunas which they interpreted as allowing boundless freedom in the sounds being produced. The group met at a regular basis, usually improvising on a number of instruments that were at hand. Every session was recorded. Before playing, they listened to the recording of the previous session and discussed it. No rehearsing or fine-tuning of pre-conceived material took place. To the view of Paul Panhuysen, their method of making music is closely linked with the oral tradition of folk music.

"This music is literally polyphonic – a composition of multiple voices. The members of the ensemble do not engage in virtuoso playing. Although each may go down his individual path, no one attempts to outdo the others in exuberant soloing. Their approach to improvisation bears none of the hallmarks of jazz. It is a group effort. They operate as a band in the anthropological sense: a small, mobile, and fluid social formation without clear-cut leadership." (from the liner notes by René van Peer)

Side A
1976
Side B
Stille Nacht, Heilige Nacht