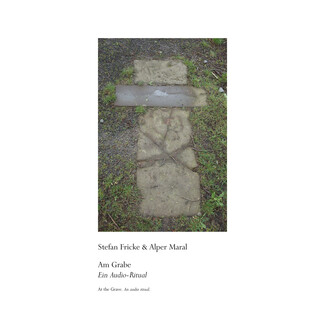 Stefan Fricke & Alper Maral: Am Grabe (At the Grave)

Am Grabe (At the Grave) is an ongoing audio ritual executed by Stefan Fricke and Alper Maral. Since 2015, they have been visiting the graves and burial grounds of composers from various eras in order to record the sounds and noises present. Each sequence is a pure field recording, serving as a memento of a bit more than 4 minutes in length. After having been compiled for a series of radio programmes, selections from Am Grabe here appear on audio media for the first time. This edition commemorates 36 composers – from Bach to Beethoven, from Mahler to Eisler, from Stockhausen to Ben Patterson –, the recordings connected serially, sometimes overlapping, and compiled across 4 LP sides.

"Am Grabe is a work in progress, a collection of homages which shall and can never end, as long as emphatic music will exist and will constantly be invented in the world." (from the liner notes)

Stefan Fricke, b. 1966 in Unna, is a German musicologist. He founded the Pfau Verlag, specializing in books about contemporary music, in 1989, and since 2008 is editor for contemporary music and sound art at Hessischer Rundfunk (Hessian Broadcasting Corporation). He teaches as honorary professor at the University of Mainz.

Alper Maral, b. 1969 in Istanbul, is a Turkish composer whose oeuvre encompasses theatre and film music, symphonic and chamber works, electro-acoustic music, a.o. He plays in a number of ensembles such as – for early music – İstanbul Barok, A-415 and Bornova Trio, as well as – for contemporary music – Karınca Kabilesi, Control Voltage Project and Alper Maral Multiphonics Ensemble. He is professor at the Ankara Music and Fine Arts University.