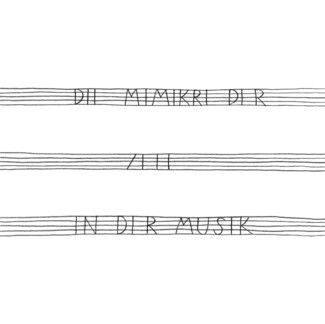 Andrea Tippel was born in 1945 in Hirsau in the Black Forest and grew up as the middle of three sisters in Bremen. Her parents were the architects Maria Alexandra Mahlberg and Klaus Tippel. In 1969, she became a state-certified actress, then studied philosophy and psychology in Berlin, Hamburg and Munich.

In 1971, Tippel moved to Berlin and began creating drawings, objects, composites, texts and books, as well as a few oil paintings. She had her first exhibition with Tomas Schmit in 1974, started making artist books in 1980 and editions for various galleries from 1987. She maintained close friendships with Suzanne Baumann, Henriette van Egten, Ludwig Gosewitz, Dorothy Iannone, Dieter Roth, Tomas Schmit, Jan Voss and Emmett Williams. Tippel was appointed as a professor at the Hochschule für Bildende Künste Hamburg in 1997 and co-founded the Dieter Roth Academy (DRA) in 2000. She passed away in 2012 in Berlin.

The first song, "hotduiknow", is a sprechgesang loop of the epistemological question "How do I know?", without a final universal answer: How do we know that we know what we know? Like Tippel, all great philosophers like Platon, Kant or Descartes asked this question of relationship of perception and knowledge, without arriving at a definitive answer.

"Herr Kurzweil + Herr Frommherz" is based on a children's song well-known throughout Germany: "Der Kuckuck und der Esel" ("The Cuckoo and the Donkey"). Its lyrics, describing a quarrel between a cuckoo and a donkey about who of the both was the better singer, are by Hoffmann von Fallersleben, who also wrote the text of the German national anthem. Tippel transformed the two 19th-century animals into two 20th-century futurists, asking who has the better vision of the future: Ray Kurzweil, scientist, book author and now a director of engineering at Google, or Fridolin Frommherz, a fictional German scientist from the novel "Vom Mars zur Erde" (1914) by utopian Albert Daiber. Frommherz, living in the year 2222, decides to stay on Mars as the only member of an expedition group, deeply impressed by a higher civilisation found on the red planet.

The last song, "when i die please do what you want (Testament)", brings up another philosophical question: Who decides over my body when my mind is absent – and is it still my body? But the song turns the Descartes body/mind question into a kitsch chanson, a stereotypical imitation of a 'foreign', sexually attractive woman, unfortunately with a dead body.

Edition of 200 with reproductions of drawings by Andrea Tippel on the sleeve and on the labels, and an additional postcard. 5 copies contain an original drawing (10cm x 15cm).

Side A
1. hotduiknow
Side B
1. Herr Kurzweil + Herr Frommherz
2. when i die please do what you want (Testament)