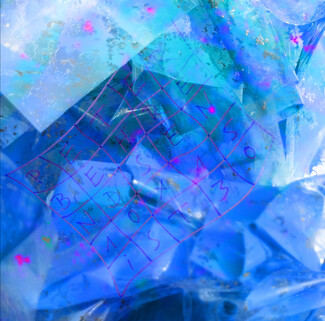 Peter Behrendsen (b. 1943) is a Cologne-based radio producer, performer and composer of experimental music. He started concerning himself with electro-acoustic music in 1972, was a member of Josef Anton Riedl's ensemble and assistant to Klaus Schöning at the WDR radio play studio (Studio for Acoustic Art). He organized numerous concerts and festivals for experimental music in Cologne, most notably BrückenMusik, a series of concerts in the box girder of the Deutz bridge. After Nachtflug / Atem des Windes in 2017, this is his second LP on Edition Telemark.

What Behrendsen had in mind for the concert was not a programme of solo pieces but a collective improvisation with musicians and visual artists. Being sceptical about conventional "free" (psychodynamic) improvisation, he decided to go with an approach that John Cage called "with the head in the sky – and the feet on the ground": between individual freedom and preconceived rules.

The total length of the concert was set to 60 minutes, each player had 30 minutes in sections between 2 and 10 minutes. Their length and distribution was decided by chance. Within their sections players had individual freedom: Musical communication was not mandatory but possible, emerging musical relationships would often be unintentional. Simultaneously, 5 videos by visual artists were projected in random order, again without any intended correlation between sound and video.

For the LP, the concert recording had to be adapted in length, i.e. reduced to 2 parts of about 15 minutes each. To maintain the character of a whole, the 60-minute concert was cut into 2 equal parts, mixed down and cut into 2 halves for both sides. The result is a new piece: denser but still transparent, the relationships between the musicians even more abstract – a new composition.

Regular edition of 240 in glossy sleeve with artwork by Dietmar Bonnen. Special edition of 60 including the LP, the Obst Music CD with the full-length recording, both in their regular sleeves, and a numbered card signed by all musicians, all housed in a plastic outer sleeve.