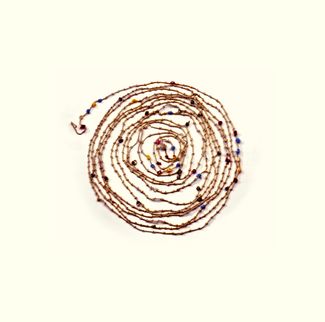 When Terry Fox went from San Francisco to Europe in 1972, he discovered the great pavement labyrinth at Chartres Cathedral. It consists of 11 concentric rings with 552 steps and 34 turns leading into the center. The discovery of the labyrinth became a revelation to him. He saw it as a metaphor for his own life, the numbers of rings and turns corresponding to cycles of health and sickness he had undergone. Thus he decided to base all of his works until 1978 on the labyrinth. These include two major sound works, one of which – "The Labyrinth Scored for the Purrs of 11 Cats" – was later released on cassette and LP, while the other has remained unreleased so far.

"552 Steps Through 11 Pairs of Strings" was a performance made in Fox's loft in San Francisco on August 14, 1976, starting at 10 pm and lasting 4 1/2 hours. He stretched 11 pairs of piano wires of 11 different thicknesses across the floor, attached them to turnbuckles at each end which he hooked to eye-screws into the wooden floor. Each pair of wires passed over a wooden bridge at both ends. He played this instrument with a soft mallet in one hand and a score in the other. The score was a 34-foot string tied with 552 knots. Each knot represented a step in the labyrinth with the 34 turns indicated by either a piece of wire in a knot (a move to the next longer pair of wires) or a rubber band around a knot (a move to the next shorter pair). The audience was in the dark loft of the floor below.

"We were all mesmerized by the beauty of the piece and lost in its grace. Around midnight a light rain began to fall outside the windows completing the piece's perfection. He played for another two hours or so. It also happened to be my birthday. It was the best birthday I ever had." (from the liner notes by Alan Scarritt)

This double LP includes four selections from the performance. A gatefold sleeve reproduces the score, a photograph and a drawing of the instrument, and the invitation card to the performance. Texts by Terry Fox and Alan Scarritt. Edition of 300.