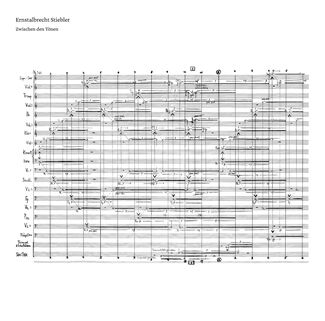 Ernstalbrecht Stiebler (b. 1934) is a German composer of minimalist and reductionist contemporary music. Since the early 1960s, he has been developing a unique compositional style that draws on minimalist structures and repetitions, though not in any way related to the so-called Minimal Music, but rather influenced by Minimalism in visual art and characterized by long static tones that slowly change and evolve over the course of a piece.

Stiebler has composed for solo instruments as well as for different chamber musical and orchestral line-ups. Many of his ensemble pieces are built around long tones coming together in specific intervals, often alternating between dissonance and harmony, sometimes involving microtonal structures. Often, the single instruments are hard to distinguish, instead the musical space opened up by the complex harmonies, disharmonies and pulses of interference becomes the focus of listening.

This double LP collects four live recordings of pieces journeying "between the tones" ("zwischen den Tönen"): "Intervall 19" and "Slow Motion", composed in 1997 and 2003, respectively, are apt examples of Stiebler's style employed for chamber ensembles, with static tones putting every tonal nuance under microscopic view, and slow movement allowing for observation of the slightest variations. The third piece, "Zwischen den Tönen" (1997) is an anomaly in his oeuvre in that it makes use of his distinct techniques but is written for women's choir. The edition is rounded off by a recent recording, "ortung" (2018), again for chamber ensemble, that displays a newfound ease and compositional intuition that has become apparent in his recent work. All recordings are previously unreleased.

"With great concentration the essence of sound becomes clear in Stiebler's late work, here in the heyday of his advanced age, and this has brought his music to the listeners and locations of the alternative avant-garde of noise, ambient and the real-time music scene, in which a culture of heartfelt dedication to sound has long existed. The fact that Stiebler's initiation of precise listening also constitutes a challenge to the cultivation of classical music (he is a great admirer of Mozart) has not yet been properly recognized." (from the liner notes by Matthias R. Entreß)

Edition of 300 in single sleeve with two printed inner sleeves. Liner notes in German and English by Matthias R. Entreß and Ernstalbrecht Stiebler.