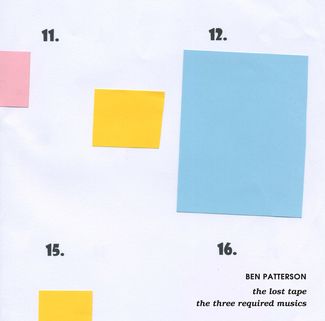 "Radiophonic minutes of the search for a probably lost tape piece, and a reconstruction thereof with real instruments." Produced by Hessischer Rundfunk (Hessian Broadcasting Corporation), Germany, in 2015.

When future Fluxus artist Ben Patterson (1934–2016) traveled to Germany in 1960 in order to study with Karlheinz Stockhausen, he brought along a tape piece that he had produced in Hugh Le Caine's electronic studio in Canada and that he wanted to show to Stockhausen. They met briefly in the context of the World Music Days of the International Society for Contemporary Music (ISCM) in Cologne, but Patterson immediately sensed that their aesthetic ambitions and viewpoints differed too much, and in the end, he didn't even present him his piece. Instead, his attention was drawn to the Contre Festival at Mary Bauermeister's studio, a counter event to the ISCM festival presenting works by George Brecht, La Monte Young, John Cage, a.o. Virtually overnight, Patterson's aesthetic thinking changed radically, and the cornerstone was laid for his coming role within the Fluxus movement.

In 2013, Stefan Fricke, editor for new music at Hessischer Rundfunk, approached Patterson about a broadcast of that old tape piece. Patterson didn't know its whereabouts, so Fricke and him together with Cologne-based composer hans w. koch set out for a journey through Patterson's large collection of tapes, some labeled, some unlabeled, sometimes the labels not matching the contents. The journey was recorded with Patterson inserting and ejecting various cassettes, always commenting on what was being heard. In the end, the electronic piece couldn't be found, so it was decided to re-record it using various toys, instruments, and small devices. For the new recording, Patterson brought a score titled "The Three Required Musics" which he considered to be related to the tape piece and which required preparatory work in the form of cutting out colored pieces of paper and pasting them into a time grid.

This LP contains the recording of the search on side A and the new recording of the score on side B. It is presented in a full-color sleeve showing a detail of hans w. koch's paper time grid, with liner notes by Stefan Fricke and hans w. koch, and two inserts: the first containing the original score "The Three Required Musics" with new notes by Ben Patterson, the other reproducing koch's complete paper score in A2 format. Edition of 300.

Side A
The Lost Tape
Side B
The Three Required Musics