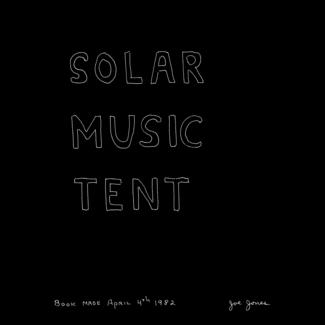 LP reissue of the cassette edition "Solar Music Tent" documenting an installation and performance in Hagen, Germany, originally released by Joe Jones in 1982 in an edition of 10 copies.

From the early 1980s onwards, Joe Jones released a handful of self-recorded music machine performances on tape under his own record label "Tone-Deaf Music". Most tapes came in a standard xeroxed sleeve with a handwritten title and instrument listing. A few, including "Solar Music Tent", were released in combination with a book: The cassette was included in a red ring binder that held a handwritten photo documentation of the performance of the same name at Karl-Ernst-Osthaus-Museum in Hagen on April 1, 1982, a handwritten music notebook, and an invitation card. The recording itself was titled "Solar Music #5" and was made on March 16, 1982, with the instrument ensemble of the Solar Music Tent at Jones' apartment in Düsseldorf.

Like the previous Jones releases on Edition Telemark, this reissue is limited to 200 copies and comes in a gate-fold PVC sleeve: The right-hand side holds the LP, the left-hand side holds A4-sized facsimiles of all artwork that was included in the original edition. 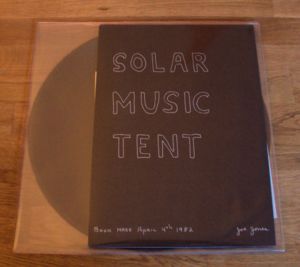 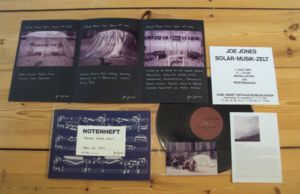