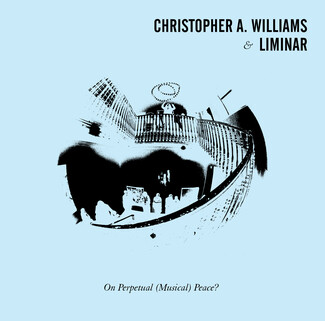 Christopher A. Williams (born 1981) is a contrabassist, composer and theorist of experimental and improvised music whose artistic research takes the form of both academic publications and practice-based projects.

"On Perpetual (Musical) Peace?" (PMP) is one of his projects – an experiment in musical cohabitation with large improvising ensembles. It is inspired by Immanuel Kant's essay "Zum Ewigen Frieden: ein Philosophischer Entwurf" which speculates that nations do better for themselves by sorting out their differences through an international federation instead of through warfare, thus proposing a path to lasting peace. (It later influenced the UN Charter and EU Constitution.)

Williams argues that Kant's idea of hospitality, publicity (transparency), and perpetuality (sustainability) may help players in improvising ensembles to articulate and transform their ways of playing and thinking, thus opening up new ways of interacting with each other. Composing in this way becomes less about giving the players a compositional structure to realize, and more about tweaking inherent constellations that are already present within the ensemble.

This LP features the results of PMP realized in Mexico City in 2019 with Liminar, a Mexican ensemble that works at the boundaries between composed and improvised music, performance and sound installation, and regularly performs in Mexico City's main chamber music halls as well as in museums, galleries and alternative venues. An extensive PMP concert took place at Bucareli 69, an art and concert space in a late-19th-century villa near the city's historical centre. The recordings for this LP were made afterwards in the studio NAFF.

Edition of 300 pressed on UN-charter-blue vinyl, with printed inner sleeve.